Posted by mjombazecoder_zvak7y Posted on November 30, 2021 0 Comments on Author Alice Sebold apologizes to man cleared in 1981 rape
Posted in dailymailysports

Author Alice Sebold apologized Tuesday to the man who was exonerated last week in the 1981 rape that was the basis for her memoir Lucky and said she was struggling with the role she played ‘within a system that sent an innocent man to jail.’

Anthony Broadwater, 61, was convicted in 1982 of raping Sebold when she was a student at Syracuse University. He served 16 years in prison.

His conviction was overturned on November 22 after prosecutors reexamined the case and determined there were serious flaws in his arrest and trial.

In a statement released to The Associated Press and later posted on Medium, Sebold, the author of the novels The Lovely Bones and The Almost Moon, expressed her regret in helping to convict Broadwater all those years ago.

‘First, I want to say that I am truly sorry to Anthony Broadwater and I deeply regret what you have been through,’ she wrote in her apology to the newly-freed man.

‘I am sorry most of all for the fact that the life you could have led was unjustly robbed from you, and I know that no apology can change what happened to you and never will.

‘Of the many things I wish for you, I hope most of all that you and your family will be granted the time and privacy to heal.’ 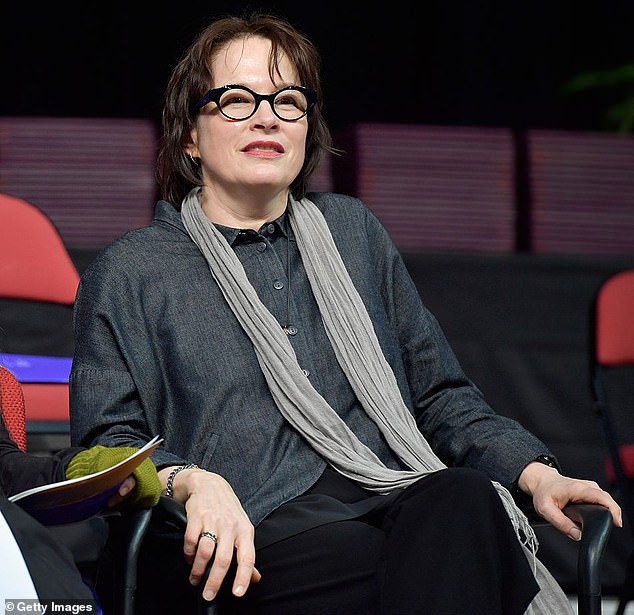 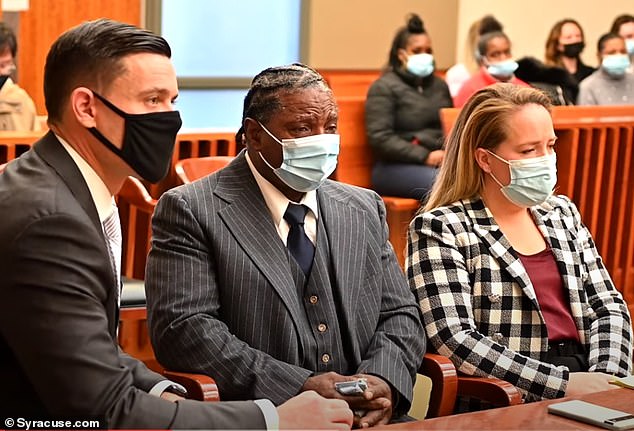 Anthony Broadwater’s, center, conviction was overturned on November 22 after he served 16 years in prison. He is now 61 years old

She continued to claim that as a ‘traumatized 18-year-old rape victim’ she chose to put her faith in the American legal system.

‘My goal in 1982 was justice – not to perpetuate injustice,’ Sebold, now 58, said. ‘And certainly not to forever, and irreparably, alter a young man´s life by the very crime that had altered mine.’

‘I am grateful that Mr. Broadwater has finally been vindicated, but the fact remains that 40 years ago, he became another young black man brutalized by our flawed legal system. I will forever be sorry for what was done to him.’

‘It has taken me these past eight days to comprehend how this could have happened.

‘I will continue to struggle with the role that I unwittingly played within a system that sent an innocent man to jail. I will also grapple with the fact that my rapist will, in all likelihood, never be known, may have gone on to rape other women, and certainly will never serve the time in prison that Mr. Broadwater did.’

‘Throughout my life, I have always tried to act with integrity and to speak from a place of honesty,’ she continued.

‘And so I state here clearly that I will remain sorry for the rest of my life that while pursuing justice through the legal system, my own misfortune resulted in Mr. Broadwater’s unfair conviction for which he has served not only 16 years behind bars but in ways that further serve to wound and stigmatize, nearly a full life sentence.’

Melissa Swartz, an attorney for Broadwater, said she had no comment on Sebold’s statement. 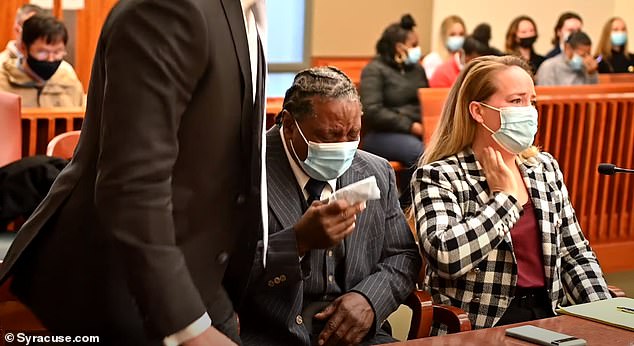 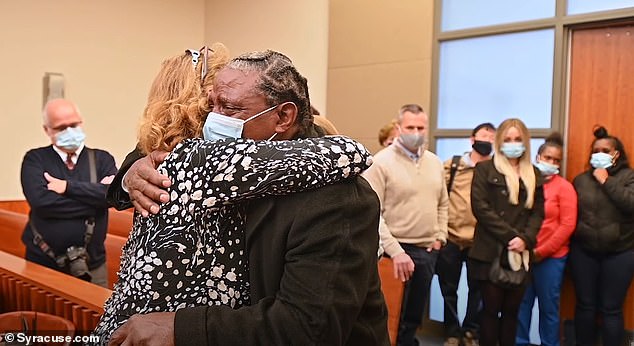 He was released from prison in 1999 but has remained on the state’s public sex offender registry. In her apology, Sebold claims that she was traumatized and relied on the justice system, which, she said, is flawed

Sebold wrote in 1999’s Lucky of being raped and then spotting a black man in the street several months later who she believed was her attacker.

Sebold, who is white, went to police. An officer said the man in the street must have been Broadwater, who had supposedly been seen in the area.

After Broadwater was arrested, Sebold failed to identify him in a police lineup, picking a different man as her attacker because she was frightened of ‘the expression in his eyes.’

He was convicted based largely on Sebold identifying him as her rapist on the witness stand and testimony that microscopic hair analysis had tied him to the crime. That type of analysis has since been deemed junk science by the U.S. Department of Justice.

Broadwater, who was released from prison in 1998, told the AP last week he was crying ‘tears of joy and relief’ after his conviction was overturned by a judge in Syracuse.

He remained on New York´s sex offender registry after he was released from prison and has worked as a trash hauler and a handyman.